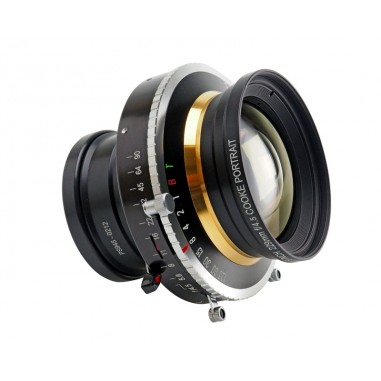 The PS945 lens is a versatile visioning tool: Wide open, at f/4.5, you will see a beautiful glow in the highlights with no loss of sharpness or resolution.

Stop down the lens to f/11 and higher and note the stunning look of the out of focus areas of your image. The characteristics of this lens are unlike any other. The original design of this lens is from the vintage Pinkham & Smith Visual Quality Series IV Soft Focus Lens used by early 20th century master impressionist photographers. These talented photographers made soft focus photography an art form using, most notably, Pinkham & Smith lenses, yet today, this original lens design offers much more. Use the Cooke PS945 to capture portraits, fashion, landscapes, weddings and for artistic experimentation. It lends an emotion to product shots that you just can't achieve afterwards in Photoshop.

The quality of diffusion is midway between the softness of the first Pinkham & Smith Semi-Achromat lenses made in the late 1890s and a conventional sharp lens. It performs just like the rare and revered, original Pinkham & Smith Visual Quality Series IV lenses that were produced in Boston, Massachusetts in the early part of the 20th century.

The selection of aperture controls the degree of diffusion. Your choice of subject, lighting conditions and final processing will influence the final print results, but in general you will achieve the following effect: At f/11, the lens performs like a conventional sharp lens but without the unattractive, out-of-focus background that would be imaged by most conventional lenses. At f/8, the lens will produce a sharp image but absent an unpleasant hard edge. At f/5.6, the image appears more velvety but in focus with a subtle roundness of the edges. At f/4.5, the lighter areas appear to generate their own luminous glow without losing focus, or losing the contrast against the darker areas.

The original Pinkham & Smith lenses achieve their distinctive soft focus in a manner different from other lenses. Using the traditional glass available at the time, craftsmen hand-corrected multiple surfaces of the lenses to achieve their unique soft focus look. The introduction of aspherical surfaces gave Pinkham & Smith lenses a higher-order spherical aberration that results (when the lens was used fully open) in an image with both very high resolution and a self-luminescent quality. Cooke has reproduced the unique performance of these hand aspherized lenses using modern design techniques that duplicate this unique soft yet high-resolution performance exactly.