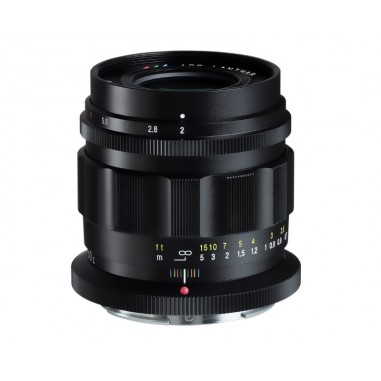 The Apo-Lanthar designation is given to especially high performance lenses in the Voigtlander lens lineup, with APO being derived from the apochromatic optical design. A need for apochromatic optical designs that reduce the longitudinal chromatic aberrations of the three primary colours (RGB) of light to practically zero arose with the increasing popularity of colour film. Now, with the current range of high-resolution digitals sensors, this need for extremely high-level control of chromatic aberration is even more pertinent than when film changed from monochrome to colour in the middle of the 20th century. So rather than just being for solved old technologies, apochromatic optical designs are indeed a subject requiring serious consideration in the digital age.

The APO-LANTHAR 50mm F2 Aspherical is the perfect combination of ultimate optical performance and compactness, with an overall length of 64.3mm and a weight of 347g.

This lens is equipped with electronic contacts, but there are restrictions on the bodies that can transfer lens data. Please check the list below: